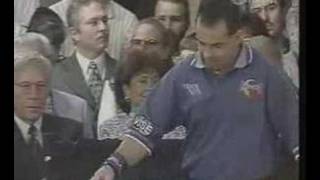 Personal: Born in a bowling family. Mother Kathy won a title on the Ladies Pro Bowlers Tour...he is one of five family members to throw a perfect game...averaged 200 at age 13...Also works as district sales manager for Ebonite International...Enjoys golf and working out, other favorite sport is baseball...Boyhood hero is Pete Weber.

Career: In 2015 had season best finish of fifth in Maine Xtra Frame Shootout...Joined the PBA in 1990 and become a full-time Tour player in 1992 when he made his first TV show in Green Bay, Wis., finishing fourth...Tied Norm Duke's record for the best six-game block in PBA history (1,635 272.5 average) in Wichita, Kan., in 1998...Won 1999 Greater Detroit Open for his first and only title ...Retired from full-time competition in early 2000s, but returned to full-time status in 2011-12...In 2011-12 finished third in Scorpion Open during World Series of Bowling and fifth in Xtra Frame Detroit Open...Owns 21 PBA Regional titles.