PBA Regional Recap: Fach Finds Title No.4 This Season in One of Ten Events Over Past Two Weeks

It is no secret that the objective of every regional competitor is to win a regional title. These past two weeks gave bowlers the best chance because the PBA held 10 regional events. Six of the seven regions hosted at least one tournament, and it is time to run through them all right here on this week’s Regional Recap.

Out in Delaware, anybody who delivered a +52 set or higher for eight games moved onto bracket play on Sunday. The top four bowlers earned a double bye, the next highest four earned a single bye, while the rest duked it out in the first round. Ryan Shafer, David Handlowich Jr., Rick Graham, and Steve Weber eventually found themselves inside the final four for a one-game matchup.

In the top half of the bracket, four-seed Handlowich Jr. upset the one-seed Shafer, 212-184, while Weber earned the other final spot after handily dispatching Graham, 236-166. In the championship match, Weber continued his run and took down Handlowich Jr., 220-176.

Subsequently, bowlers under age 50 competed over the weekend, along with some seniors who opted to bowl in both Middleton events. Using the same format, 16 bowlers qualified for bracket play, with some getting a double-bye and some a single-bye.

However, the double-bye recipients did not fare well, as all four dropped their first match in the quarterfinals. Todd Sigeti moved past CJ Petrin in the first round 212-203, while Ryan Lane defeated Darren Andretta 188-165. Both finalists looked for their first career regional title, but Sigeti got the best of Lane for title No. 1, 235-159.

You can view the East point leaders here.

At Suburban Lanes in West Virginia, 69 bowlers rolled eight games attempting to get into the top 16 for match play. After qualifying in 9th, Sam Cooley moved to first with just the position round remaining. Justin Knowles, who squeaked into the 16th and final spot by a roll-off, catapulted to second place with one game left.

Then there was Graham Fach, who began his day in 12th place, but finished near the top. Knowles needed to win his match by at least 28 pins to pass Cooley in the standings, which he did, winning 201-163. However, Graham Fach entered position round with the same score as Knowles and won his matchup 246-204, which was enough to pass both Cooley and Knowles.

After earning title No.4 this season, and the tenth of his career, Fach takes a monstrous 5,100-point lead in the Central region.

You can view the Central points leaders here.

Just over an hour outside of Oklahoma City, the Fort Sill Southwest Open brought in 75 competitors for a chance at a Southwest Regional title. Trey Ford III charged through the gates first, going +124 for qualifying and continued the charge after the advancers round, leading at +157.

Ford III lost a bit of his luster the following day during match play as Deo Benard jumped to first at +222 with former Shocker Nathan Bohr 60 pins behind. Bohr needed a 31-pin victory against Benard to snag the win, and Bohr delivered. The former Team USA member produced a 258-209 win for his 24th regional title and first since 2017. 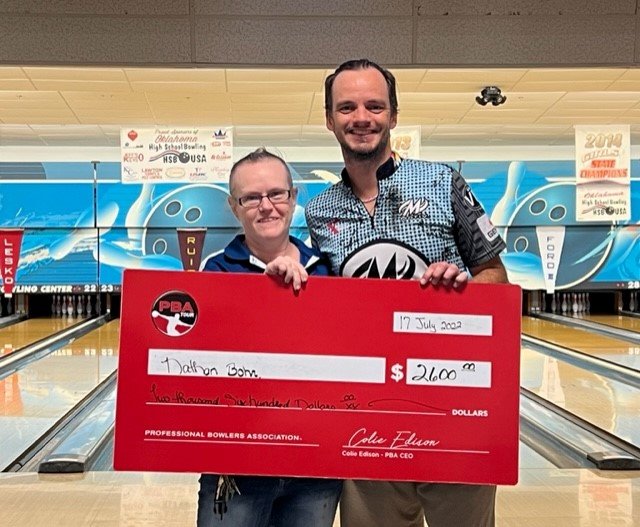 Doubles tournaments are always a good time, but they’re a better time when you make a run at a title. Thirty-one teams consisting of a member and non-member entered for a chance at a couple thousand dollars a piece and a win for their resumes. Seven of the eight teams qualifying for bracket play hailed from Oregon, but the top duo of Jacob Dobkins and Shawn Horenberger came from Boise, Idaho.

However, the Idahoans were bounced in the first round, opening the door for anyone else. Jake Klemsen and Joe Lipan took that opportunity and defeated Eryk Jensen and Craig Tuholski in the finals, two games to none, for the first career title for each bowler.

You can view the Northwest points leaders here. 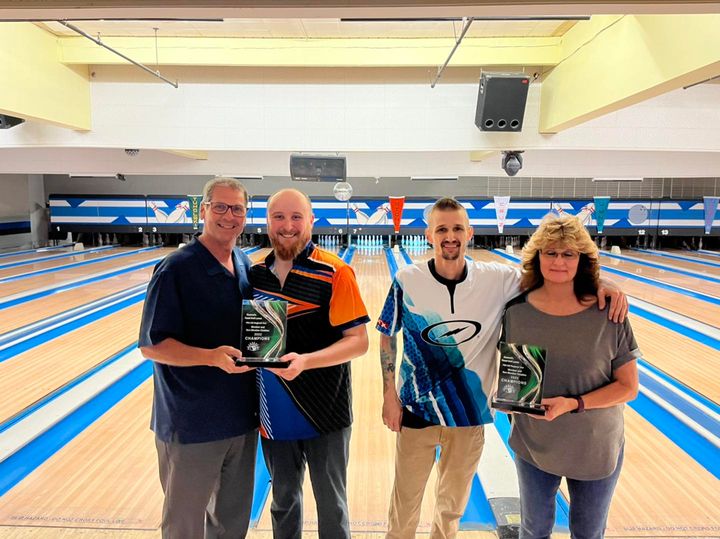 Now onto the weekend of the 23rd, 52 seniors fought in Hampton, Virginia, using the Del Ballard pattern. Just five bowlers went plus for qualifying, led by Kip Roberts at +178. Nonetheless, 16 bowlers bowled well enough to get into the bracket, some earning a bye and some earning a double-bye.

In the finals, a pair of double-bye players appeared in Bobby Hall II and Darryl Bower. After both bowlers delivered multi-mark victories in the semifinals against their respective opponents, it was bound to be an eventful final match. Both bowlers stayed clean through eight frames, with each grabbing a double.

However, in the ninth frame, Hall II missed a single-pin spare to make way for Bower. Bower just needed to stay clean in the tenth with good count, and he did just that, winning 207-200 for his 19th career title.

You can view the Senior South points leaders here.

Over in California, a PBA and PBA50 regional took place at Yosemite Lanes in Modesto. PJ Haggerty led for eight games, going +324, almost 100 pins over second place. But of course, when the almighty bracket comes into play, anything can happen. Haggerty won the first two games but lost his next three games to lose his first match against the 16-seeded Ivan Miyasato.

Miyasato made a run to the semifinals but fell in that match to Anthony Schanen, who shot a 300 earlier in the day and continued his strong performance. Tyler Cortez Schenck defeated David Haynes in the other semi to move on for a chance at his second regional title of the season.

t was a back and forth battle, but Schenck doubled in the tenth to force Schanen to do the same, but a devastating nine-pin left Schanen just short of his first career regional title. Schenck picked up his second title of the season in just two attempts.

You can view the West point leaders here.

Simultaneously, 67 bowlers competed for a PBA50 regional title at the same alley where multiple titleists qualified for bracket play. Matthew Weathers qualified 8th but won his first two matches, one of which was against the one-seed John Gould. He’d continue that run into the semis defeating Marty Deh 159-135 and 219-168. In the other half, legend Ron Mohr faced off against Dan Long, where Mohr eventually moved on.

The finals arrived, and for the second time in the past three weeks, Mohr would lose in the finals. Weathers put together a four-bagger in the middle of the game, which was enough to take home his first career regional title.

You can view the Senior West points leaders here. 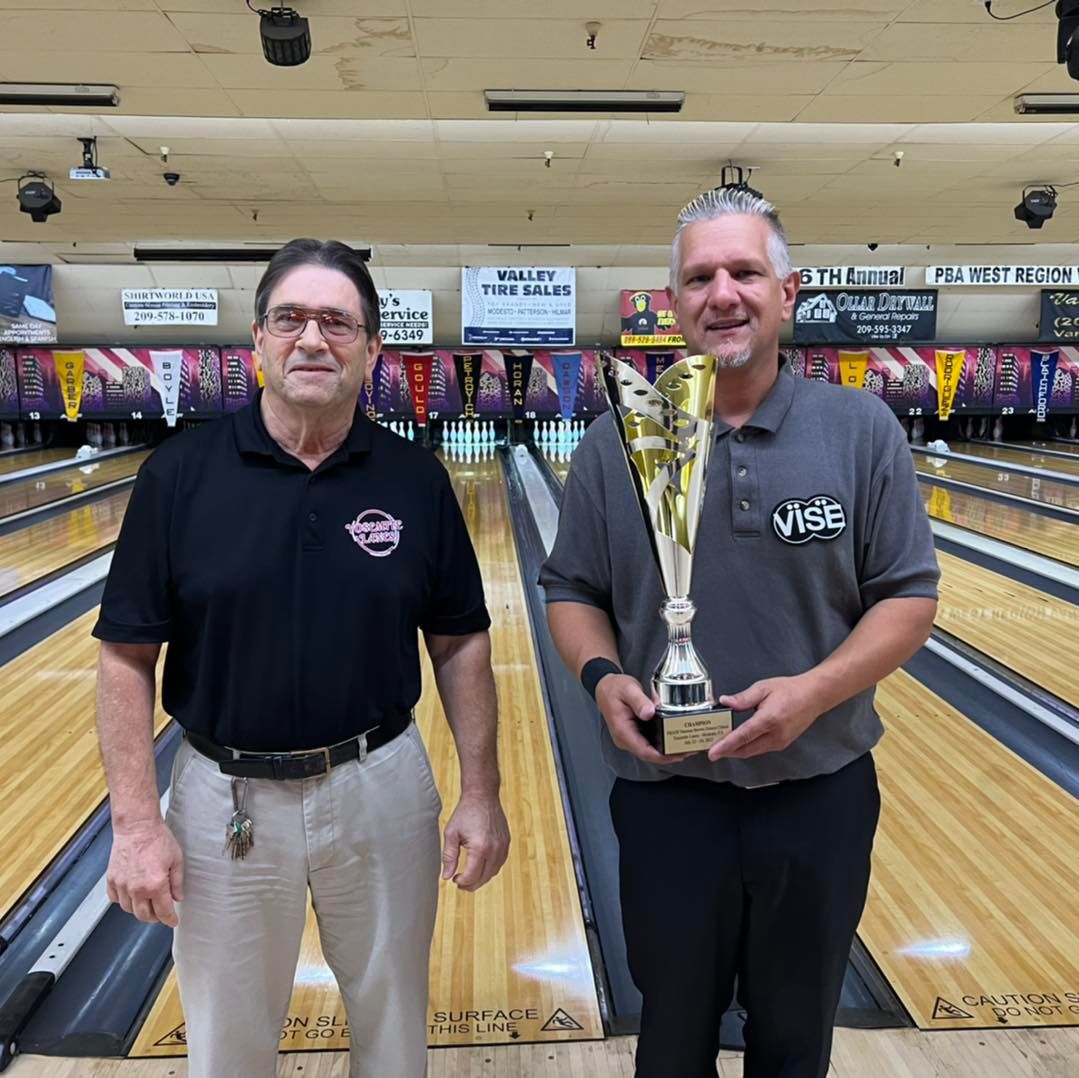 Right between PBA50 national tour stops, many of the best and brightest were sure to take a breather from the tournaments by… bowling a different tournament. $25,000 extra hit the prize pool for the regional at Al-Mar lanes last weekend, giving bowlers an opportunity to put some extra cash in their pocket before the PBA50 stop in Hammond.

John Burkett definitely threw more than three strikes on day one, taking the lead at +246, followed closely by Bill Watson at +241. But one advancers round later, and Brad Angelo snatched the lead. A couple more advancers rounds, and Angelo would hold onto the one-seed for the stepladder, Bill Watson snagged the two-seed, John Burkett hung onto the three-seed, and Dino Castillo snuck into the last spot.

Castillo used the final seed wisely, defeating Burkett in the first match by single-digits, 178-172, and then taking down Watson 191-159. In the finals though, the 2022 USBC Senior Masters Champion fell to Brad Angelo 257-210. That marks Angelo’s 9th career regional title, and his wallet is a little thicker with $6,000 added.

You can view the Senior Central leaders here. 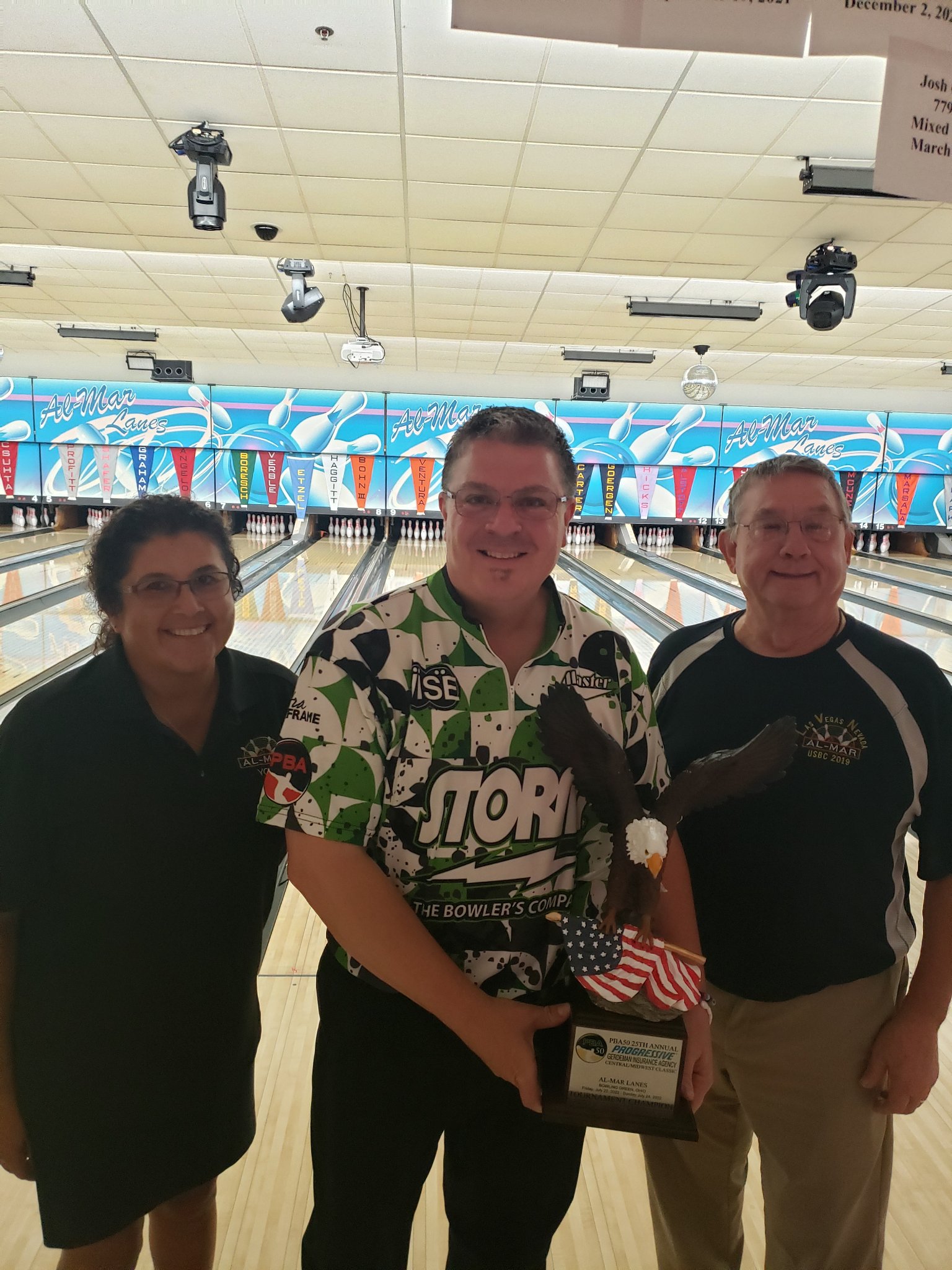 Last but definitely not least, the Super Regional in good old Lubbock ran at South Plains Lanes. Just winning a title the week prior, Nathan followed up his victory with the qualifying lead at +264. After the advancers round, Anthony Simonsen took the lead, but nobody was near out of contention with 12th place only 102 back of first place with 12 games of match play to go. Through eleven games the two-hander remained on top but had one final bout with Ildemaro Ruiz Jr. for the title.

Down 46 pins, Ruiz, Jr needed a 17-pin victory to jump Simo for the win. To get to this point, Ruiz, Jr went 3-0 in his last three matches, shooting a 771 series. And against Simonsen, his run continued as he went on to defeat his opponent 242-211. Ruiz now owns three regional titles and two this season. He also controls the Southwest Region points lead, over 5000 points ahead of second place Anthony Simonsen.

Phew, that was a lot of bowling. If that was too much competition for you, that's too bad. Over the next two weeks, another nine events will find their way onto the leaderboards and possibly allow others to take a commanding lead, much like Graham Fach and Ildemaro Ruiz Jr. did in these past two weeks.

Check out the upcoming schedule and regional leaders.