The original PBA TV 300 game bowler, Jack Biondolillo, died Saturday October 2, 2021 at the age of 81 from dementia with complicating kidney failure. A true Texas bowling legend, the native Houstonian is most famous for just one game, but what a game it was. Biondolillo rolled the very first live nationally televised 300 game in the opening match of the 1967 PBA Tournament of Champions defeating Les Schissler, 300-216, earning a $10,000 bonus in front of a reported 15 million viewers on ABC-TV.

Two PBA titles, a National Doubles win with USBC Hall of Famer Don Ellis, and an October 1971 Japan Gold Cup were among his biggest wins. There was also time as a pro shop and center manager at various Houston area bowling centers, and as an analyst for a Houston television bowling show with former ABC Sports commentator Dan Lovett.

“I remember squatting down on one knee, knowing that tenth frame shot was there. That eleventh one was a little high, but the pins still fell straight back. “The best strike of all was that last one. Just watch those pins, you watch how the pins fell off the left side of the deck,” Biondolillo said with a hint of pride in his voice.

“Lollipop” or “Lolli” as he was known to friends, still felt he let the tournament get away due to of all things, a glass of ice water. After defeating Mike Durbin in the match preceding the 300 game, Jack reached for a glass of water before the semifinal match with Don Johnson.

“There were five glasses of ice water on a tray just off camera. I was really warm and reached for a glass as (famed University of Oklahoma football coach) Bud Wilkinson, sitting right behind the tray tried to stop me, but it was too late. The cold water felt great, but it also stopped flow of adrenaline. He told me afterward he would let players drink lukewarm water on the sidelines, but not ice water because it cooled off the body too much too quickly. I firmly believe I would have won that tournament had it not been for that glass of ice water. I was in that groove where everything was working. Afterwards, everything stopped,” Biondolillo said.

Johnson ousted Biondolillo in the semifinal, 228-172, before falling to Jim Stefanich in a two frame rolloff 48-36 after tying at 227.

Jack was also the first to feel something even recent TV 300 game shooters experience, the drop of adrenaline during the next match. In his final interview weeks ago, he mentioned it after watching the last several TV 300 games.

“After those last few 300’s this year, I saw there was a difference how they threw the ball the next game. It’s a hell of a thing to overcome to be that charged up, then it’s gone just like that. Wished I had figured it out,” he said.

Over thirteen seasons on the PBA Tour, Biondolillo had 26 top five finishes, six runner up finishes and two titles, both wins in 1963. He defeated Don Carter in the Birmingham Coca-Cola PBA Open, then Ray Bluth for the Tucson PBA Open. A 1968 ankle injury from slipping on baby powder on an approach hampered his later tour career, eventually retiring after a 1972 runner up finish at his home house, old Stadium Bowl in Houston, within the shadow of the famed Astrodome to Paul Colwell.

Biondolillo was known as one of the most demonstrative players on PBA telecasts, common today, but not so much in the 1960’s.

“Johnny King, Carmen Salvino, and I were the most colorful reacting bowlers on the TV shows then. It wasn't acted or rehearsed, we reacted,” Biondolillo said with a chuckle.

Evidence of this can be found on the handful of PBA and Championship Bowling telecasts surviving on YouTube. There’s Jack, showing his playful pleasure or distain as the crowd showed its appreciation. One such reaction was part of the Pro Bowlers Tour telecast opening sequence in the early 1970’s. The bowler jumping into the air with bent legs at the end of the image sequence is Jack, his reaction to the seventh strike of the historic 1967 perfect game. 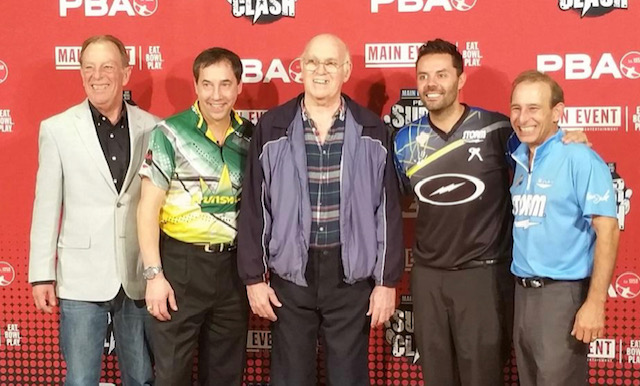 "It's a mix of everything. We set up special challenge matches between high schoolers, men, women, older people, local celebrities, pros — you name it, we have them bowling. The idea is just to have fun. There's no prize money or anything like that,” Biondolillo told the Houston Chronicle in a 2006 story.

Lovett and fellow KTRK-TV anchors and employees were also part of a Tuesday night group who visited Stadium Bowl he managed at the time for a weekly night out in the 1970’s after the 10 p.m. newscast.

“We'd close the door and bowl all night. There was Ron Franklin (later with ESPN), Ed Brandon the weatherman, Bill Worrell, who does the Rockets games; and even cameramen and whoever else worked in TV. We'd have so much fun Tuesday nights. We just bowled and drank. It was a blast, but they all hated me Wednesday morning when they had to go to work dead tired,” Biondolillo said in the same 2006 Houston Chronicle article.

Born in Houston August 30, 1940, Biondolillo grew up in Midtown Houston, then the Oak Forest neighborhoods, did well academically and played football before graduating from St. Thomas High School. After declining a chance to attend college due to asthma, his father Joe suggested sticking with bowling, something Jack was starting to become known for in various centers around the city with the strong strike ball delivery soon to be seen PBA a few years later.

“Jack had one of best styles the state of Texas ever produced. When he was really on, his ball was something else,” according to BPAA and Texas State USBC Hall of Famer Jamie Brooks.

Jack also enjoyed horse racing, golf, and fishing. The latter was illustrated in a deep sea rodeo tournament by being the first to catch a 6’ 3” 25 pound sailfish ever caught off Texas’ Matagorda Peninsula.

In his later years, Biondolillo remarked with family he lived his life five times over, traveling around the world, getting to know and work with well-known celebrities in and out of bowling who helped in fund raising, many becoming lifelong friends.

Biondolillo is survived by sisters Margaret and Barbara, daughters Tori and Tina, five grandchildren, and three great grandchildren. A memorial service is planned for Saturday October 16. 2021 at Memorial Drive United Methodist Church in Houston at 10:00 am followed by a reception.