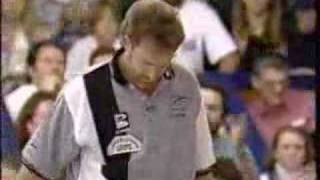 2010-11: Returned to PBA Tour competition for first time since 2002-03...was originally exempt from 2009-10 season but sustained a stress fracture in his lower back and was ranted a medical deferment after bowling in only five events...Best finish of 55th in U.S. Open...made match play four times...ranked 68th in earnings ($9,000).